Blogs
Why Printed Information Storage is Safer Than Electronic The latest consumer survey commissioned by Two Sides, “Print and Paper in a Digital World,” highlights interesting consumer feedback on print vs digital.

In recent years, there has been an explosion of data breaches in the financial, business and healthcare sectors. This has made people everywhere sit up and take notice of where and how their important personal data is stored.

It is not surprising then, that the recent Toluna survey commissioned by Two Sides revealed that 78% of U.S. respondents keep hard copies of important documents at home as they believe this is the safest and most secure way of storing their information.  A similar number (76%) are increasingly concerned that personal information held electronically is at risk of being hacked, stolen, lost or damaged.

For a taste of what these digital breaches can look like, check out a few examples covered in this blog. Millions of small businesses, households, and patients are affected by data breaches every year. While moving from paper to digital records seems like it should save time and energy, the reverse can also be true.

Trusting the news found on digital media has also become increasingly difficult as hoaxes and misleading information pop up on the internet and then are shared on social media. Survey results show that 74% of respondents thought fake news was a worrying trend.  In total, 56% said they trust the news stories they read in printed newspapers versus 35% trusting the news stories they read on social media.  64% said they would be very concerned if printed newspapers were to disappear. The results clearly show that having a printed copy, whether it be a newspaper, an invoice or a health or financial record is generally perceived to be a more secure way of receiving information than its digital counterpart.

Age group differences were examined between the overall survey group and the 18 to 24-year-old age group (table below).  The younger age group was less inclined to keep hard copies of important documents, and also less concerned about their digital information being hacked, stolen, lost or damaged (11% lower response than the average).  However, they showed similar levels of trust for print media and an even higher concern about fake news as a worrying trend. 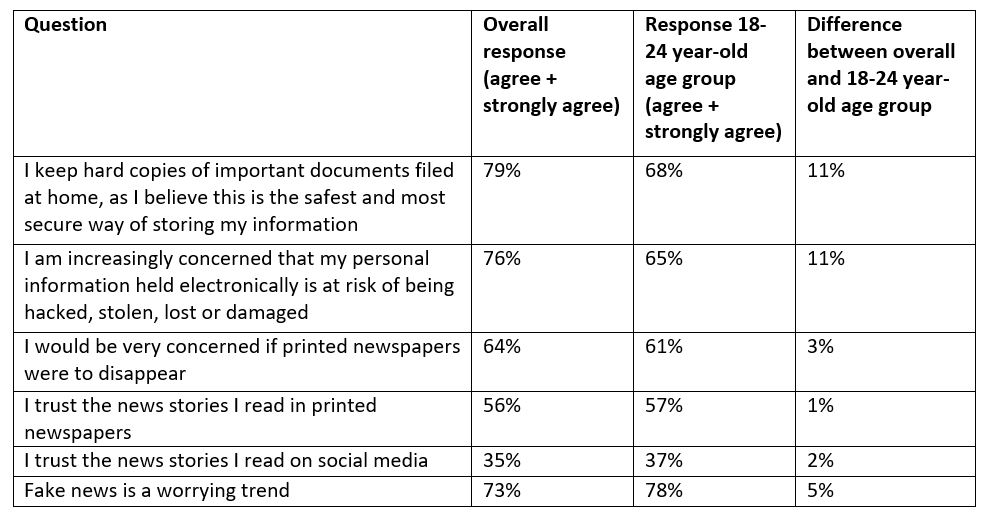 For the full survey report, go to http://twosidesna.org/Survey2017.